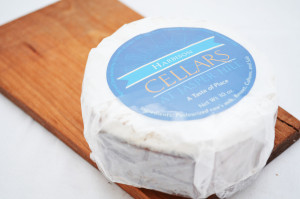 One of the understated pleasures I have experienced in my years working for Caputo’s has been watching the gradual transformation and growth of our cheese selection to include some phenomenal domestic cheeses.

Although we remain a Southern European specialty foods store, in my mind, cheese is one of the primary things that sets us apart. Now we, in the good ol’ U.S. of A., may not have as much practice as say, France, but we are making some damn good cheese these days. One of the companies that have been at the heart of the American-made cheese renaissance is Jasper Hills Farm in Greensboro, Vermont.

Jasper Hills is a small dairy farm that’s making a big difference with the food they produce. They are drawing well-earned acclaim for their fantastic skill at promoting the terroir of the Northeast. Jasper Hills has received a lot of deserved fame for their affinage but their creamery is no slouch either. Now to the matter at hand: Harbison, which is my favorite domestic cheese. Well, at least today (I really like cheese).

Harbison, named for a Greensboro icon, comes as a small, self-contained wheel, which weighs about two-thirds of a pound. It has a delicate, white, bloomy rind that is incased in spruce bark early in its six to 13 week aging. Some people mistakenly call this soft ripened cheese a domestic attempt at Camembert or Vacherin Mont d’Or. Comparing Harbison to other cheeses as a sort of poor man’s substitute really cheapens what it is. Harbison is not Camembert. It doesn’t have to be. Harbison is Harbison and it’s really, really good.

When you open a wheel of Harbison you will notice the soft, spreadable texture. Eat this with a spoon or spread on a good baguette. Don’t overthink it. Harbison is rich with woody and vegetal notes like roasted vegetables and mushrooms. Where this cheese really stands out is that those notes are offset with a citrusy sweetness that knocks it out of the park.

Pair this with a good white wine like Latour Grand Ardeche, a French white which is routinely the single best steal in any wine store (I think it’s about $14.99 right now) and you will have made your evening complete.

The next time you are watching the news and some talking head says something like, “We used to make things in this country,” do what I do, eat some Harbison and celebrate to yourself the fact that some people still do.