Punch Fit for a Colonial President

by Adrianna Pachelli on June 26, 2018 in Beverages and Bitters 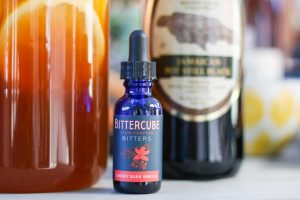 It’s no secret that colonial Americans were true imbibers, though back then it was more of a need than an indulgence. Water wasn’t necessarily safe to drink, so alcohol was the next best option. Our colonial forefathers downed an average of six gallons of pure alcohol per year compared to the current American’s consumption of about two gallons. In the spirit of America’s independence and freedom to imbibe, we’re throwing it back with a colonial era punch. Rum was spirit of American choice long before whiskey, we’re mixing it into a classic Philadelphia Fish House Punch. The recipe was developed by a pre-Revolution social club in Pennsylvania called the Schuylkill Fishing Company of Pennsylvania, also known as the State in Schuylkill. Made up of politicians, fishermen, and common Philadelphians, the club actually declared the assemblage a sovereign state, and called themselves “citizens.” 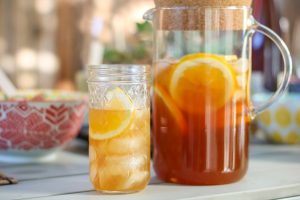 We’re throwing in a nod to the pre-Prohibition era as well with the much more recent culture of cocktail bitters. Bittercube’s cherry bark bitters add both a level of bitter complexity and a nod to George Washington’s little foray with a cherry tree. Rebel against the tradition of icy beer with us, and pour yourself a glass of punch. If punches like these were good enough for George Washington and the like, they’re certainly good enough for me.

Garnish: lemon wheels and freshly grated nutmeg
In a large bowl, add sugar and lemon peels, and rub together to release the citrus oils into the sugar. (This is called oleo-saccharum.) Allow oleo-saccharum to infuse for at least 30 minutes.
Dissolve sugar with warm tea. Add rum, cognac, lemon juice and bitters. Stir to mix. Add a block of ice to chill, and continue to add smaller pieces of ice for desired dilution. Garnish with lemon wheels and freshly grated nutmeg. Ladle into individual glasses.