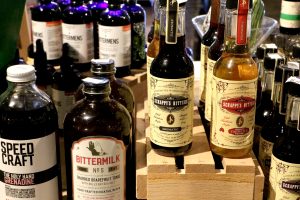 When introduced to the flavors, the history and, of course, the applications of bitters, we could not help but fall down this new rabbit hole.

With the recent interest in craft cocktails, which has created a resurgence of bitters and an explosion in the number of brands producing them, it’s hard to imagine that, as of 2004, there were only three brands of bitters available commercially.

Originally developed as medicines, bitters are an alcoholic preparation with botanical ingredients, such as gentian, cinchona bark, cascara, cassia, and orange peel, among others. Historians can trace the origins of bitters to the ancient Egyptians and the Middle Ages’ herbal bitters and tonic preparations. During the 1800s, bitters became what we know them as now, and began to be incorporated into cocktails, because their aromatic and flavor profile gave the libations more depth and balance. Some of the early and most prominent commercial aromatic bitters during the time that are still recognizable names were Angostura Bitters and Peychaud’s Bitters.

Indeed, some 150 years ago, bitters were booming and countless makers offered their concoctions to support the uniquely American cocktail culture. With Prohibition, however, it all came to a screeching halt, and cocktails became sugary to cover up sub-par booze. Not so any longer.

We are thrilled to participate in the resurrection of bitters and a dawning of a new era in cocktail culture. With the help of our heavyweight mixologist friends, and lots of blind tasting, we have cultivated our palates to recognize these values in the bitters collection you can find at our market. Come in for a sample, and then go home and try your hand at mixology in your home bar.

Shop the market for bitters