A Clafoutis for Every Season 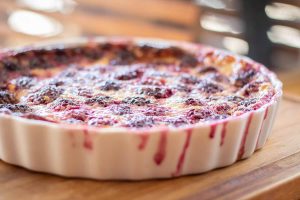 While the best season of the year was in full swing (a.k.a., cherry season), I found myself with heaps of gorgeous cherries from the Farmers Market. With an intense desire to bake something unique and seasonal, I could not seem to find a recipe that didn’t require the tedious task of pitting each cherry.

A few days later while discussing the upcoming Tour of France class in a meeting with Adri, she suggested I make a clafoutis as the dessert. The clafoutis originated in Limousin, in the southwest-central region of France. It is a traditional French baked custard with whole cherries—emphasis on the ‘whole’ part. The most important part of baking with whole cherries is that they consist of the primary chemical in almond extract. That gives the dessert a subtle almond essence serving as a beautiful compliment to the final product. I quickly came to find out that the annoying little pit inside those juicy cherries contain a chemical that creates cyanide, however completely safe in small amounts… I promise!

While traditionally made with the early summer fruit, the base is versatile enough to be baked as the seasons change. It is delicious to be made with various berries, late summer’s plump stone fruits, or even chunks of ripe apples, or pears. What’s not to love about that?

After some more research, I finally was set to try out Tartine’s recipe, to gain my own understanding of what a clafoutis is really like. I followed the recipe precisely (a rare occurrence for me), but was still uncertain of what I was looking for. I pulled a slightly wobbly custard from the oven, smelling of caramel and looking stained sporadically with vibrant cherry juices. I indulged in a small piece and took the rest for an inspection from my coworkers—who only had positive reviews to give. While gratifying to hear, I wasn’t sure it was the clafoutis for me, it seemed a bit too wet.

After some more research, David Lebovitz’s recipe seemed to be the next best option, calling for a touch more flour and less milk. Clafoutis pt. 2 came two days later. With pt. 2, came more ambiguous feedback from coworkers. Being the stubborn gal I am, I insisted on making it ONE last time before deciding a final recipe to present at the class.

Clafoutis pt. 3 came with a similar recipe to pt. 2, however with one big difference. Rather than using fresh whole cherries, I used the Italian Luxardo cherries and cut down some of the sugar. This last one only seemed to make my life more difficult. After hearing feedback from all sides giving me even less of a sense of direction, it was finally the time that I resulted to using my own baking intuition.

After discovering the beautiful role that both fresh cherries, and Luxardo cherries had in this dessert, my final recipe combines the best of both worlds. To respect the rarity of the original dessert’s use of whole cherries, they remained. I also used some syrup from the Luxardo in place of some of the sugar. That syrup gave the dessert another level of moisture that I didn’t find in David Lebovitz’s original recipe, and a richer sweetness that white sugar simply did not give on its own. It was perfect once chilled, and drizzled with more Luxardo syrup, and a cherry on top.

Preheat over to 375. Butter a ceramic tart dish or any shallow baking dish, and disperse the whole cherries in the greased pan.
Combine sugar, Luxardo syrup, salt, milk and vanilla bean in a small saucepan. Cook until sugar dissolves and the mixture is steamy. While that is heating, whisk eggs in a medium size bowl. Sift flour into egg mixture and mix just until combined.
Remove milk mixture from heat, and slowly pour through mesh sieve into the egg mixture, while whisking.
Once the batter comes together, pour it over the cherries and bake for 25 minutes. Remove from oven, and raise the heat to 450. Sprinkle raw sugar evenly across the surface and return to oven for 5-7 minutes, or until it looks caramelized. Remove and let cool on a wire rack until serving.

Substitutions for cherries:
-Berries such as blueberries, blackberries, or raspberries, can be used as a direct substitution for the whole cherries.
-If using juicier stone fruits such as peaches, nectarines, or plums, cut back on the amount of milk by 1-2 Tbs.
– Cut pieces of fruit into ½ inch chunks. 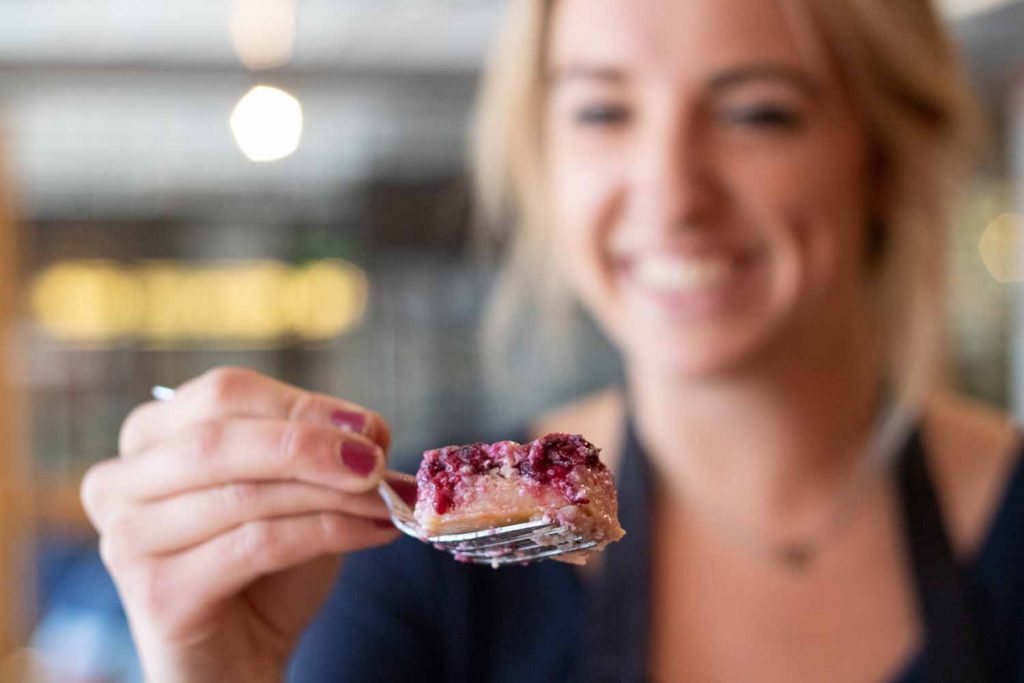