A Heart of Cream: The Story of Burrata and Why We Make it

by Sondra Charbadze on September 5, 2017 in Caputo's Culture 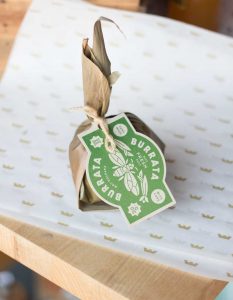 One of my favorite customer questions is always accompanied by a finger pointing timidly to the cheese counter glass. “What’s that thing wrapped in leaves? A cheese?” Every time I hear it, a smile springs to my face. Thanks for noticing, I want to say. And then, are you ready for a story?

This week, we are dedicating the Caputo’s blog to our favorite summer cheese and in-house specialty, and we are kicking it off with a little history lesson. 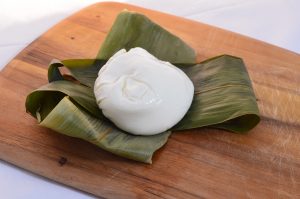 That mysterious cheese behind the counter and our favorite summer treat is an Italian beauty called burrata. Unlike other cheeses we import and then sell at Caputo’s, it is made at the end of the cheese counter, where you can catch Antonia (our full-time affineuse), Christian, or Fiona in the act of cheese-making. Plunging gloved hands into steaming water, you’ll see them stretch the softened mozzarella to a soft and shiny shell. Then, they pull apart strands of mozzarella curd, soak the strands in fresh cream, and stuff the mixture inside the waiting shell, twisting the top together to keep the creamy goodness inside. After a few hours of this process, they are ready to place the half- pound balls in plastic bags and then wrap them in thick, green leaves, tying them together with twine. This leaf-tying practice pays homage to the original burrata makers, who wrapped the fresh balls in the locally abundant asphodel leaves as an indicator of freshness; bright, fresh leaves indicated a bright, fresh cheese, whereas wilted leaves meant the cheese was more than a few days old. 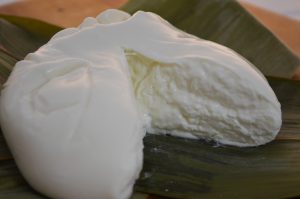 But burrata is more than just a palate-pleaser and the perfect summer cheese. Like everything we carry at Caputo’s, it tells the story of its birthplace, and burrata was born on a snowy winter’s day in a small town in Southern Italy. The town is Andria, the year is 1920(-ish), and the maker is a poor farmer left with the byproducts of a mozzarella that would not be sold in the valley that day, as the layers of snow made travel impossible. Faced with the discomfort of wasting the precious mozzarella scraps, stretched curd, and cream, he could have dried the cheese curd to use in pasta, or perhaps drunk the cream like thick milk. Instead, Lorenzo Bianchino gave credence to the cliche that “necessity is the mother of invention,” and he invented. Making art from waste,  he recycled the byproducts of mozzarella to make something (arguably) more beautiful than the product itself: burrata, a delicate queen of Italian cheese. True to the day on which it was born, burrata is a milky-white orb of creamy decadence, as fresh-tasting as a winter morning, as buttery and rich as it’s Italian name implies (burrata means “buttered”).

Lorenzo Bianchino was perhaps the first maker of burrata, but he was not the last. His creation was such a hit that it became a practical and delectable treat for neighboring cow-keepers in Andria. Many poor farmers were selling their fior di latte, or cow’s milk mozzarella, to the rich who now sneered at the traditional buffalo milk mozzarella of the masses. But after selling their mozzarella, the farmers had no cheese left for themselves or their families. Making burrata was the solution that gave the poor their mozzarella with a heart of cream, and it was (accidentally) even more decadent than the cheese of the decadents. In the 1950’s, local cheese factories began producing it, and it slowly began to spread across Italy and the United States. 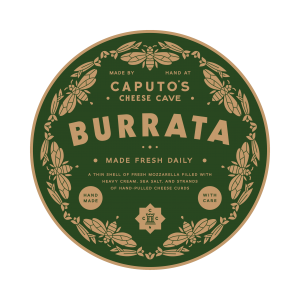 Every time I hand over a leaf-wrapped burrata to a customer who moments before was pointing with puzzlement into the glass case, I wish I could be there to witness the magic of that first bite- cutting through the shell to scoop, spoon, and slurp out the creamy center. Burrata isn’t just a testament to the Italian spirit and a gift to American palates. Like every cheese we sell at Caputo’s, it comes wrapped up in a story of the hands who crafted it, the animals that provided the milk, the lands from which they grazed, and ultimately, the culture that gave the cheese its style, form, and life. This lovely Italian invention is just one more example of the Caputo’s mission: honoring and preserving the past, sharing our expertise in the present, and trailblazing into the future.

Bite into some burrata and I think you’ll be singing the praises of Italian ingenuity, too. 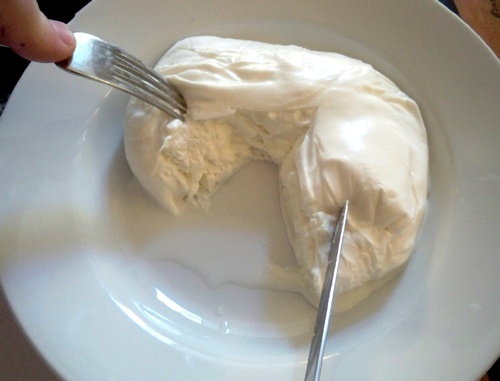