From Italy to Utah: The Creminelli Salami American Dream

There are a lot of Italian-American rockstars. Kids who at one point said, “Hey, I’ve got a real talent for this; I’m special; I’m beautiful.” To name some of my favorites: Tony Bennett (Anthony Benedetto), Sonny Bono (Salvatore Phillip Bono), and Lady Gaga (Stefani Joanne Angelina Germanotta). 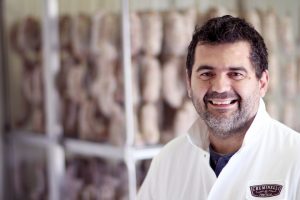 Cristiano Creminelli never changed his name, nor is he a true rockstar to the musical masses. Cristiano is a humble man who ventured out of Italy to live the American Dream—just like your grandparents and mine. He has, however, become a rockstar in our culinary world, and if this blog was the cover page of Rolling Stone there would be fireworks bursting in the background, tigers lounging, and maybe an eagle perched on Cristiano’s shoulder.

Anyway, this story begins about 400 years ago, in the region that is now Piedmont, Italy. Sandwiched between Milan and Turin sits a town named Biella. Northern Italy is notorious for amazing culinary traditions, such as its wines, cheeses and, of course, the salamis that saturate our palates with rich and classic flavors.

Cristiano’s family has been producing salami in the Biella area for 400 years, and they have gotten really, really good at it. Cristiano’s grandfather, Ugo Creminelli, was the personal chef for General Pietro Badoglio, who was also Italy’s Prime Minister for a year before things got a little weird in the mid-1940s. Cristiano’s father, Umberto Creminelli, (some killer names in this family) later took over the family business, Salumificio di Vigliano. Cristiano began making salami when he was a young teenager under the teachings of his father. And in 1996, this young artisan began running day-to-day operations at the salumeria.

Cristiano immigrated to America in 2006 to bring his Old World Italian culinary traditions to a new—and wanting—clientele. He yearned to produce salami just like his family had for centuries, so he left Salumificio di Vigliano, leaving his younger brother, Andrea, to run the company. Cristiano found Utah to be a great location to start Creminelli Fine Meats because of a specific bread of pig, named Duroc, found here. Durocs are similar to the style of pig used in northern Italy and are a long-standing American farmer favorite due to their fast growth rates, lean and rich fat marbling, and high moisture levels in the meat, which yields larger amounts of usable cuts. Their advantage in muscle quality combined with their well-established ability to grow fast was what Cristiano needed and valued.

Creminelli uses family farms that operate on a small scale and raise pigs the way pigs should be raised: with pasture access (pigs are creatures of comfort and like to be warm when it’s cold and cool when it’s hot, so they like shelter), in proper social structures (i.e. with their families and social groups), good vegetarian feed (not industrial detritus), and never treated with antibiotics. Some of the Creminelli meat is also sourced from Iowa now, because Creminelli found a group of farmers who follow the same standards as the farms in Utah. Not many companies go the extra mile that Creminelli does when selecting and producing meats. When you mix that with generations of Italian salami mastery, you get the same artisan product that you would in Biella, Piedmont.

Now comes the fun part of Cristiano’s American salami dream. He found an area to begin production and farms to work with, so the next step was figuring out where to make the salami. This is where the legendary Tony Caputo comes crashing into the Rolling Stones story. Tony has always been heavily involved in the Italian-American community in Utah, and he invited Cristiano to produce in the basement of the downtown store. Ten years ago, Caputo’s looked dramatically different from what it is now. The sandwich shop was on the corner of the street, the market was where the deli is now and our basement was empty enough to race up and down on pallet jacks (think Ben-Hur meets Mario Kart). I remember meeting Cristiano about a year after I started working for Matt and Tony. His English was decent, but raw. His demeanor was cordial, but stoic. His smile was tremendous. We cornered off a piece of the basement for Cristiano to work his magic. This was a sacred area where not even the most epic pallet jack race could enter (if you’re still having trouble imagining this style of race just picture teenagers wearing aprons peddling giant medal scooters that are intended to move literal tons of canned tomatoes…sorry, Tony).

Cristiano worked relentlessly for the first months of production. At one point, he wanted to make sure the baby salamis were beginning their lives perfectly, so he put a cot in the basement near the curing cell to sleep on during the night, every few hours waking to make sure the humidity and temperature levels were accurately accounted for. The salami came out of their cell weeks later, gentle to the touch and rich with flavor. Originally the salami was sold out of a specialty cooler by the unit. Later came fancy butcher paper with colored labels; then, came atmospheric controlled bags that I swear you can shoot into space. Over time, as more and more Utahns caught wind of the amazingness of the meat magician Cristiano Creminelli, the salami production and sales grew and grew. Cristiano could no longer produce the amount necessary to keep up demand in our basement, and he moved to a much larger facility by the airport.

Over the years, Creminelli Fine Meats has changed its packaging on its meats and continues to grow the brand and salami styles to extraordinary heights. But the company’s product quality and integrity to sustain Italian culinary traditions has remained true. The company now has more than 50 employees and is growing steadily.

Cristiano came to America a humble salami maker wanting to bring his family’s traditions to a new world, and he’s still is living that dream to this day—one stick of cured, delicious, meat magic at a time.

3 replies on “From Italy to Utah: The Creminelli Salami American Dream“