Our 4 Picks from Solstice

The secret is spreading about how Utah is such a great place for chocolate. Truly, it is hard to hide. Between the many makers, prevalence of the bars in stores, and sheer numbers of local people who devour the greatest chocolate on this blue planet, we have something special going on. Now, if our local chocolate makers were a bunch of hacks just plodding their way through, who would care? The rather pleasant fact that we have some of the VERY BEST chocolate makers, each showcasing different takes on the state of American chocolate, within an hour of my house makes a chocolate fiend such as myself very happy indeed.

Solstice is one of these makers who make me proud to share a state with them. I met them early in their chocolate-making days, when they were making tiny batches for sale at farmers’ markets only. Strangely, it was a coworker who first shared it with me, and my first response was, “That’s not terrible…” – to which my friend protested at my rudeness. But I maintain that the vast majority of chocolate in the world is terrible, so that counts as praise from a snob as pretentious as me! I met the makers shortly thereafter, and the chocolate had improved dramatically. Now we were in “that is really pretty good” territory. By the time they launched officially, and on store shelves, they had already carved a recognizable niche in the realm of fine chocolate. 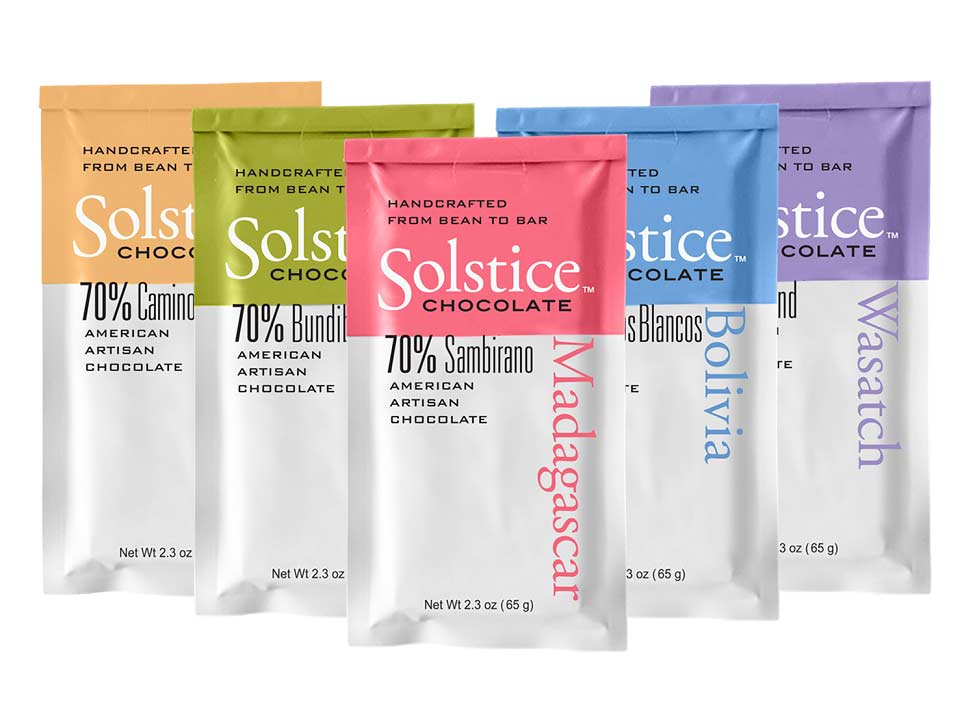 The style of Solstice is compelling. They bring us these wonderful cocoa beans with honest purity. There is no denying nor mistaking the connection between the large burlap sacks of cacao that enter the back of their shop and the finished bars that proudly bear the name of the region that gave them life. But there is so much more substance behind their chocolate than merely letting the beans charge through the processes uncontested. You see, raw cacao is an INTENSE experience. It is not subtle, or quiet, or gentle. It grabs you by the face and shakes you. The flavors that eventually find their berth in the bars are there, albeit distorted by the loud, astringent, and bitter flavors.

It takes an artful touch to tame the wild portion, and to elevate and accentuate the delicate nuance. Superficially, the chocolate making process seems so simple. Roasting, cracking, and various grinding and/or aging steps develop the flavors. But that simplicity belies the difficulty. Simple does not mean easy. That is why so many chocolate makers stumble and fold before they ever unlock the secrets of chocolate production. But Solstice has it. Compared to the huge industrial makers, their equipment is so cute and dainty. Their facility is not one of ageless elegance or architectural beauty. But with those basic processes, magic suffuses that space, those ingredients. The artistry in producing fine chocolate lies in knowing the minute differences between roast levels, grinding times, ingredient ratios. Two bars with seemingly identical ingredient lists can be so completely different in how the chocolate maker wields her tools and weapons and knowledge. 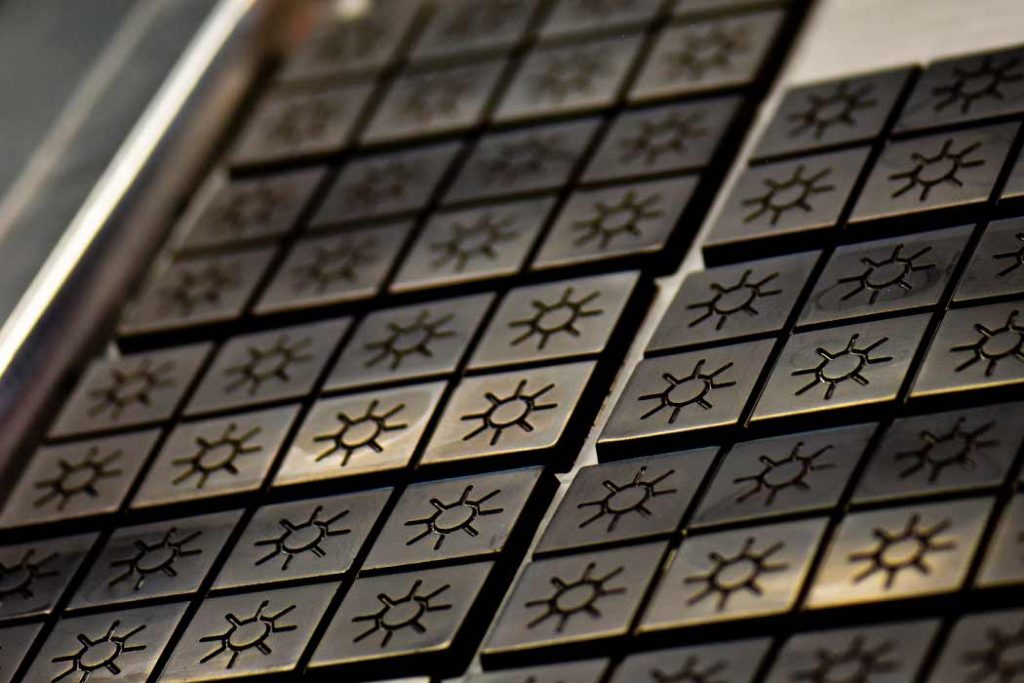 DeAnn Wallin is the lady behind the curtain, and she has developed a magical sense of taste and process. The flavors of Solstice bring out the best in their beans, and in a typically American style, highlight lighter, fresher fruit flavors with a lighter roast than many European brands. A light roast can sometimes be a liability if it allows some of the off-putting volatile flavors to domineer the experience. Somewhere in DeAnn’s methods hides her mysterious prowess to balance the bold and the calm. Nowhere will you find a brand that can imitate Solstice bar for bar. As one who has attempted making chocolate, I don’t get it.

I can – and do – dive into the tasting experience of all Solstice’s bars. Let’s look at a few now.

Most fine chocolate made with Madagascan beans source from a Swedish expat named Bertil Akesson. And so most Madagascan bars start with the same raw ingredient. And those beans are Tart – capital T necessary. They often smell of balsamic vinegar, grapefruit, and wood. But when the chocolate is finished and packaged, Solstice’s stands apart for being the (made-up word time) Madagascariest. They preserve so much of that vitality and brashness, but it is dialed down to a fun experience that doesn’t overstay its welcome. You will find a chocolate that, despite being a 70% cacao content bar, is unquestionably “bright.” It tastes of lemon and grapefruit, raisins, apple skin, and wood. It has a little bitterness, but not like stuffed-shirt poseurs from north of France. It has the mild bitterness you associate with fruit skin. It is bold and exciting and very eatable. Surprise your friends with this one because it is NOTHING like the dark chocolate of my childhood, at least. 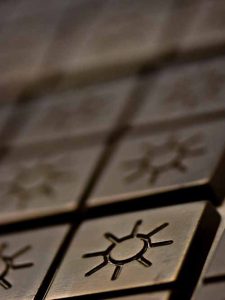 The bar from Tanzania has the high honor of being banned from the Utah Chocolate Society’s annual tournament…for winning its first 2 years in a row. In order to not simply have a dynasty, we (I) decided to disallow it to give other bars a chance. Look for fresh stone fruit like peach and apricot, cherry, and yet also honey. And somehow, a little bit of mushrooms. For bright and fruity bars, this is probably my number one pick.

Uganda was not a place where people sourced cocoa beans until rather recently, but it is not common. This bar blew me away because it is so different from other Solstice bars. Rather than being light, bright, and fruit-forward, it is deep, dark, and beautiful. It tastes like naturally-fermented sourdough bread and cinnamon. While the beans roast, it smells like banana bread. Look for green banana and even a little mango hiding in the background. And if you can find (or make!) brownies with it, buckle up!

There are those who would decry milk chocolate as an abomination. Those killjoys probably haven’t had this bar. It represents as good a bridge between dark and milk chocolate as I have ever encountered. The trick is this: it has enough cocoa in it to be quite dark at 54%, and the milk powder is an incredibly rich full-fat exclusive that combine to make a bar that is simultaneously subterranean in its deep, dark, earthy, mushroomy, spicy flavors and creamy, indulgent, delicately milky floating on top. It will make you remember your fondest hot cocoa memories, but beware! Shaking a packet of a certain powdered mix with a blonde lady will wither beside this sublime bar. Seriously, I cannot heap enough praise on it. (Wait until we discuss the Bolivian dark milk later…)

I hope you have already gone on the Solstice adventure. Revisit it. If you have not yet tried it, may your future be filled with all of their bars – three of the dark milk. Solstice wins award after award for a reason, but awards cannot tell the tales that each of their incredibly unique and varied chocolate bars can. Let Solstice preach the sermon of Utah’s greatness to you!