Q&A with Caputo’s: Comte or Gruyere? 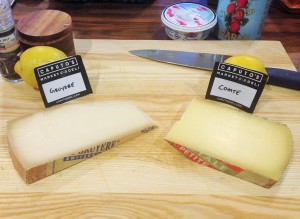 You had a cheese tasting in February of last year to compare Comte and Gruyere. Did you keep any notes? What did you decide? I am a Comte fan…so I’m dying to know. 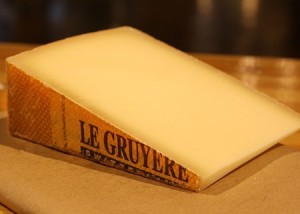 Thanks for your inquiry. I am a huge fan of Comte too. We are cranking for Valentine’s so I will have to keep this quick.

What we found was is milk and cheese made according to European PDO laws are exactly the same on both cheeses. There are many, many producers of Gruyere and many, many producers of Comte (for example Comte is France’s most popular cheese). Some producers are great and some are less great. Therefore the best wheels of Gruyere are better than most wheels of Comte and vice versa. To say which is the best just based on the name is not a holistic comparison. They are essentially the same cheese.

I will say our wheel we just got of Rodolphe Le Meunier 16-18 month Comte is as good as cheese gets! It is a steal at $25.99/lb as it would be at least $32/lb in any other store. The Gruyere we have is from Emmi. Not a bad producer, but a big one. For $15.99/lb it is also a steal. It’s much more at grocery stores. We could easily do this same situation in reverse and buy a show stopping Rolph Beeler Gruyere and get a nice, but more common, Rivoire Jaquemin Comte. However, like you, I am more of a Francophile than a Swiss lover, so we go with show stopping French and value driven Swiss.

I am not known in the industry for making politically correct statements, so my explanation here sounds to me like an annoying cop out. But I assure you it is not. Both cheeses are truly great and were both the same cheese before the borders got redrawn. Great cheese makers and affinuers on both sides.