by Caputo's Online on March 18, 2015 in Cheese, Cheese Cave, Foodie, Posts by Andy Fitz
Wait, so Drunken Goat isn’t the world’s best wine soaked cheese? No, no it isn’t.
The bar has been set a little bit higher, by one of Italy’s greatest cheese makers: Beppino Occelli. 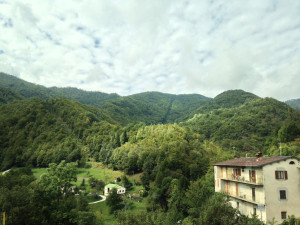 The view from the town of Pamparato, where the aging facility is

I had the great honor and pleasure of visiting their facilities in September of 2014, and what I saw was something I had written off as fantasy. When I first ‘got into cheese’ I had images of caverns and stone and wood boards – rustic, simple, authentic. I quickly learned that it was more about stainless steel, sterile environments, and logbooks. Occelli has that, too, don’t worry, but what I saw was identical to the images in my head from years ago. Their aging facility, housed within a 100 year old building in a tiny village on the side of a mountain, is made of flagstones, exposed beams, and beautiful brick. Water from the mountain is allowed to flow across the stone floor to aid in humidity control, and baskets of hay are in certain rooms in order to have the smell influence the aging cheese. My conclusion was that Beppino Occelli is a cheese wizard, for this was certainly not from the world I was used to. 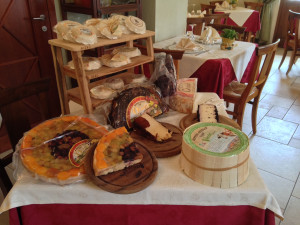 The spread of cheeses they put on display for us

My first introduction to his cheeses was back in 2010, and it was the cheese (formerly) named “Testun al Barolo.” (They have since changed the name to Occelli al Barolo, due to other cheese makers trying to copy his cheeses). The base cheese is aged for a minimum of 9 months in Barolo wine cellars, and is a blend of either cow and goat or cow and sheep – depending on which milks are available and best. After the 9 month mark, the wheel is coated in Barolo grape must (the leftover solids from making wine) and then “soaked” for 2 months with Langa Marc, another local wine. This allows the flavors of the wines to permeate the cheese and not only influence the flavor, but the grape must causes a bit of different breakdown of the milk proteins right under the surface and creates a slight cream-layer. Barolo DOCG wine is the best known red wine from the Piemonte region, and has earned the nickname “the wine of kings.” With a name like that, one wouldn’t find it surprising that you have to go through a fair amount of red tape in order to use Barolo in your product. In fact, Beppino Occelli is the only cheesemaker (in the world!) allowed to use Barolo DOCG wine on his product. So, there was little surprise last year when the experts at Slow Food, which originated in Italy, declared that Occelli al Barolo was the greatest wine soaked cheese in the world. And, accolades aside, it truly is. 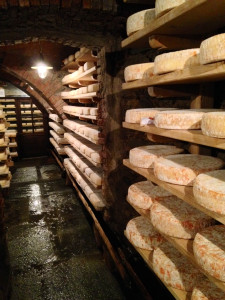 One of the many rooms in the aging facility

It is often said to not ‘judge a book by its cover.’ If I were to do that with Occelli al Barolo it would be, “Wow. Gorgeous.” And it only gets better. The cheese itself has a nice texture. It’s semi-firm, but also moist and creamy. Bits of tyrosine, a crystalized milk protein, are flecked throughout the paste. It has mild to medium sharpness, and a whole lot of fruity goodness. Simply put: It tastes like wine. I love to eat some of the grape must coating when I eat this cheese. It gives a bit of a crunch, and heightens the aromatics of the cheese. The sweet, fatty characteristic of the cheese provides you with a long finish, punctuated with the wine’s deep, bold fruit.

As far as pairings, the overly obvious are wines from the Piemonte region made with the Nebbiolo grape. But this cheese can also pair nicely with Prosecco. Grapes, honey, and caramelized pecans are all suitable, as well. I would round off my cheese plate with a fresh loaf of locally-made Moore Bread, particularly the baguette or ciabatta. We also recommend trying the other cheeses from Beppino Occelli: Testun al Malto and Testun al Foglie di Castagno.
It’s a superbly crafted cheese, enveloped in the wine of kings — truly decadent, and one of my all-time favorites.

One reply on “The World’s Greatest Wine Soaked Cheese“